When children & grandchildren inherit: per stirpes, per capita, and more—Part 1

When children & grandchildren inherit: per stirpes, per capita, and more—Part 1

Many parents wish for their property to pass to their children when they die. If the children die before the parents, the parents often want the property to go to their grandchildren instead. This sounds simple enough, but there are a few different ways property can be allocated among surviving children and grandchildren.

To illustrate the various options, we’ll use the fictional family of Henry and Wendy. Henry and Wendy have 3 children, Clarence, Charles, and Catherine. Each of their children has at least 1 child. Here’s the family tree, as it currently stands, with all of the couple’s children and grandchildren living: 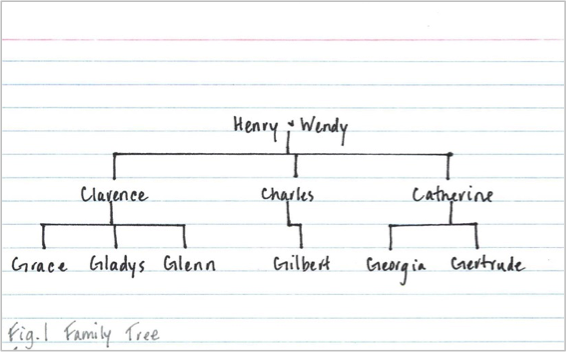 English per Stirpes or Something Else?

Let’s assume that when Henry and Wendy die (or when the survivor of them dies), all of their children are already deceased. In this circumstance, there are really two different ways their property could be allocated among the grandchildren: the English per stirpes method would produce one result, while all the other allocation methods would produce another result.

Here’s how the couple’s property would be allocated if their wills or trusts directed property to be allocated by the English per stirpes method: 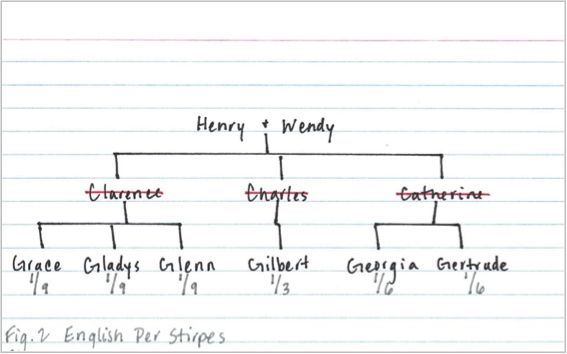 As Fig. 2 shows, an English per stirpes allocation would result in Henry’s and Wendy’s property being divided into 3 shares, one share to represent each child. A one-third shares is distributed down each child’s line: Clarence’s children share his one-third, Charles’s child receives his one-third, and Catherine’s children share her one-third. Ultimately, the grandchildren end up with unequal proportions of their grandparents’ estate. The English per stirpes method treats each line of descendants equally.
All of the other allocation methods, in contrast, cause each grandchild to end up with an equal share in this circumstance. Fig. 3 illustrates this outcome: 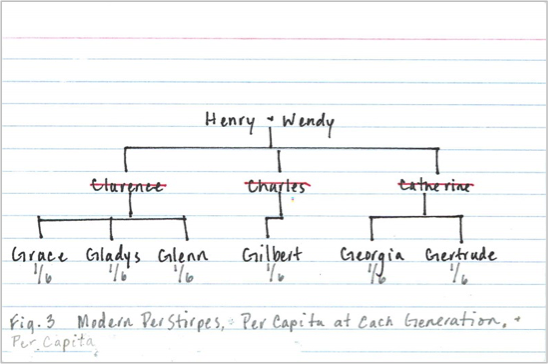